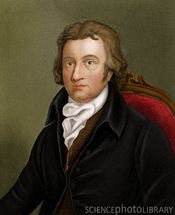 Edmund Cartwright.
During the Industrial Revolution, not to long after the invention of the water frame, there was a very large surplus of wool and cotton yard do to the invention of Richard Arkwright's water frame yarn spinner. The factories he established were producing yard and thread much faster then hand weavers and people using hand looms could use weave it.  In other words, there was no longer a big demand for it.

Edmund Cartwright (born on April 24, 1743 and deceased on October 30, 1823) decided he was going to solve this problem by creating a power loom that could weave wide cloth 1000 times fast then by hand. It didn't take very long before it was in factories and ready to be used. 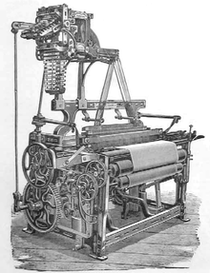 Edmund Cartwright's power loom
In the link below you'll find a narrative that tell more about the invention of the power loom and what Cartwright would later become.