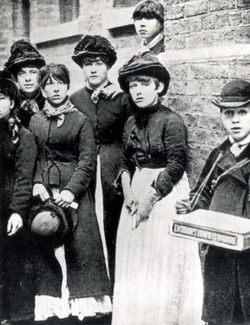 This chemical was poisonous so many girls developed phossy jaw, a bone cancer that literally disintegrated parts of the jaw. When a girl got phossy jaw, her face near the jaw gave off a green glow and slowly turned black. The jaw would soon start to give off smelly pus, and eventually the girl would die from the cancer.

Match girls worked long hours in the factories (usually from 6 AM to 6 PM) with only two short breaks. They were not allowed to talk or even sit down while they worked (otherwise they would be fined or fired). The girls only made 4 shillings a day, but they were also heavily fined if they dropped a match, talked to each other, sat down, arrived late, or went to the bathroom without permission (sometimes they went home with no pay at all). Beatings were not uncommon at the factories as well.
The following narrative describes a day in the life of Jemma Collins, a fourteen-year-old match girl. She works at the Bryant & May match factory to support her mother and sister, Ann (who had developed phossy jaw and will most likely die). Jemma is a hard-working but temperamental and rebellious girl who wants to support her mother and sick sister (even though Jemma is developing the cancer as well and finds it difficult to work). She often wants to quit or rebel against her boss, Mr. Brown. She knows that her work in unfair and cruel, but she only does it for her family.